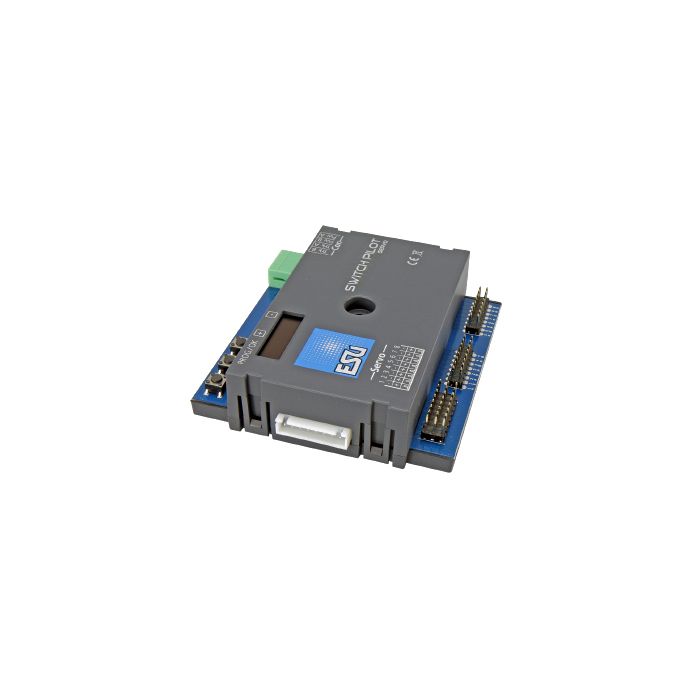 SwitchPilot 3 servo decoders are optimized for stationary use on your system and can control up to eight RC servo drives. In order to facilitate the rather cumbersome configuration of magnetic article decoders, the SwitchPilot 3 Servo has an innovative operating concept consisting of a 4-line, illuminated OLED display and three input buttons

The SwitchPilot 3 servo is multi-protocol and can be used with workstations according to the Märklin Motorola system (e.g. 6021, Central Station or Mobile Station®) as well as DCC-enabled central. The configuration can take place on both the main track and the programming track. Thanks to RailCom, CVs can also be read out.

The SwitchPilot 3 servo can be supplied directly from the digital system or an external DC or AC voltage source. The SwitchPilot 3 servo has eight outputs for the control of RC servo drives. In doing so, it can control these drives so precisely that, in addition to switching switches, any other slow movement sequences can be controlled. The SwitchPilot 3 servo has a built-in power-on pulse suppression to eliminate or reduce the system-related "twitching" of RC servos when applying the supply voltage. Furthermore, the power supply to the servo can be interrupted to prevent a "hum" of some inexpensive servos. Each of the eight servos can be operated either in "digital mode" or in the "proportional mode" introduced for the first time with the SwitchPilot 3 servo: In digital mode, the servo can start two end positions "A" and "B", depending on the switching position on the control panel. The position of the two end positions as well as the speed at which thethe servo moves in the desired direction, can be individually set on the SwitchPilot 3 servo. The digital mode is perfect for switching switches or signals that should always remain in a fixed position. In proportional mode, the servo can move and stop in any position within the end positions "A" and B. The servo only runs as long as the control panel sends a command. If you release the button, the servo stops. In this way, a servo can be stopped in any desired position. The servo speed can be adjusted individually. The proportional mode is ideal for (water) cranes or engine shed gates or any other application, for which intermediate positions are also required. For each servo, in addition to the end positions and the rotational speeds, it can be determined whether it should rock up when reaching the final position. Furthermore, the generation of the servo pulse can be influenced to adapt to the different RC servos on the market or the power supply of each servo can be switched off individually. In this way, cheap so-called so-called Analog servos as well as modern digital servos (with microcontroller) optimally controlled.

The SwitchPilot 3 servo can be used as a special feature without a digital control panel: On request, up to 16 buttons can be connected for direct switching of the servos.

The SwitchPilot 3 servo can be flexibly adjusted either on the programming track with DCC control panels or on the main track with POM ("Programming on Main") or can also be read out via RailCom® CVs. On request, he also learns the addresses directly via a programming button. The setting is, of course, the simplest with the integrated OLED displays as well as the three input buttons: All (!) Settings can be checked directly on the decoder and changed on request. "Programming" with the help of your headquarters is not required. It really can't be any easier. The ESU LokProgrammer can be used for firmware updates.