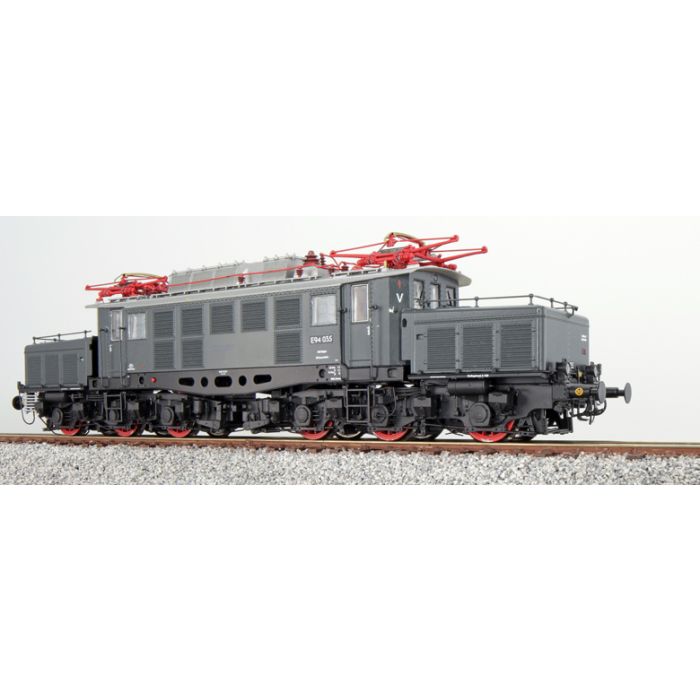 The Deutsche Reichsbahn-Gesellschaft (DRG) had the mighty class E94 electric locomotives developed as more powerful successors of class E93. Delivery of the first locomotives commenced in 1940 during World War II. Since the class E94 was important for the war effort (as class KEL 2) and therefore was not subject to delivery stops due to shortages of raw materials, 146 units of the six-axle locomotive with 3300kW and a maximum speed of 90 km/h were built until the end of the war. Already in 1946 further units that had been partly assembled previously were completed and thus the DB put another 49 units into service until 1956. The power of the last 23 locomotives of this series had been increased to 4680kW. As from 1968 the maximum speed of these locomotives was raised to 100km/h and due to considerable technical differences they were classified as E94.2 (later on this was changed to class 194.5). After the war 44 locomotives remained in Austria and were renamed as class 1020. Most of the Austrian units experienced considerable modifications during the 1960-ies. Most of the E94 units that had been located within the Soviet occupied zone were transferred to the Soviet Union and returned to the DR (Deutsche Reichsbahn, German Democratic Republic) only in 1952. The DR arranged for the refurbishment of 23 units, which were subsequently mainly hauling heavy freight trains and every now and again also heavy express trains. The domain of the DB E94 (later class 194) was also in heavy freight service; however, in between these locomotives were also used for hauling commuter trains, which, occasionally, only consisted of two pairs of “Umbauwagen” (rebuilt coaches) and thus the locomotive was heavier than the train. In 1985 the DB decommissioned the last “German Crocodiles” while the DR kept them in service until 1990. The ÖBB (Austrian Federal Railways) trusted their “Crocodiles” until 1995. 15 units of class E94 and 18 units class 1020 have been preserved, some of which are still in operation today and are used in heavy freight service by some private railway companies every working day of the week.

ESU set these six axle locomotives, which were often called the „German Crocodiles“ due to their articulated three-part frame, a memorial. The ESU model has a finely detailed metal housing and cowls. Numerous separately applied detail parts (either metal or plastic) perfectly render the powerful appearance of the prototype. Of course, we have taken into account the prototypical differences of the metal chassis according to the era. The different number of sand boxes, the realization of wooden and metal treads on the roof and, of course, the type of headlights are distinctive examples of the accuracy applied to these models. It goes without saying that the headlights are free-standing rather than simply projections from the housing. The delicate pantographs can be remotely controlled from your command station respectively your throttle and can be separately raised and lowered. During shunting only the lower right hand headlight is turned on at either end. This as well as the cabin interior lights can be switched separately. A hallmark of the era IV locomotives are the so called start-up lights, which were installed by the DB on the right hand side (in the direction of travel) at the forward end of the centre part of the chassis, which could be switched separately. The model is also equipped with the sensors for situational sounds in curves as well as a LokSound V4.0 M4 decoder with two speakers and a USP unit assuring reliable operation even on dirty tracks or extensive turnout arrangements. Due to the RailCom Plus® functionality the locomotive automatically registers with suitable command stations (e.g.: ESU ECoS). Of course, this model also has the universal electronics with plug-in current collector and universal wheel sets, which has already been proven on other ESU models. Naturally the LokSound decoder plays original sounds of an E94. In order to have sufficient space for the speaker and the enclosure each bogie has its own coreless motor complete with flywheel driving two axles. Four traction tires make sure the locomotive can transfer its power to the tracks. For perfect current pick-up the centre axles of each bogie are sprung.