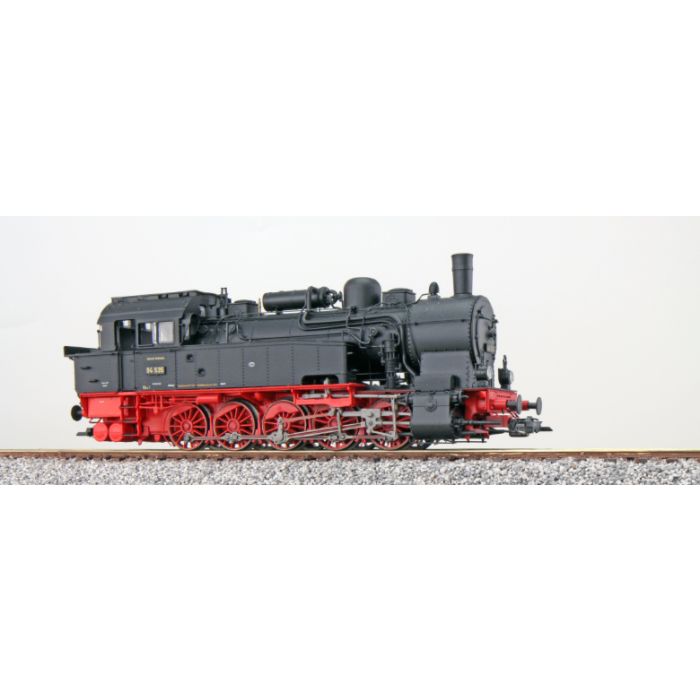 The T16.1 is the first ESU steam locomotive. The finely detailed model is mainly made of metal and has numerous separately applied detail parts. It goes without saying that we detail all the finer differences according to the prototype. The finely crafted wheels with their thin spokes are an eye catcher by themselves. The model represents a locomotive with worn wheel rims; therefore we could realise prototypical spacing between the axles. Thus there is sufficient space for the wheel flanges assuring safe running both with two rail or three rail track systems. In order to minimise any dimensional compromises of the chassis we guarantee superb performance and running qualities on radii of 420mm and larger. Since these locomotives were employed in local freight service as well as for shunting, the models are equipped with a digital coupler in the NEM shaft at both ends. Suitable loop and hook couplers with non-magnetic loop are supplied with the model. Of course, the synchronised smoke emission from the exhaust is either controlled by the axle sensor or by internal electronics of the LokSound decoder. Naturally we listened carefully to the prototype in order to replicate the sound as accurately as possible. Thus you can acoustically simulate the Riggenbach counter-pressure brake on a downhill grade by activating it with a function button. The sounds from the different air and feed pumps varied. In shunting mode the lower right lanterns will be turned on, just as it was common practice with the prototype. The third headlight can be switched separately in order to allow displaying the signal Zg7 indicating a special train travelling in the opposite direction. For the first time the lanterns are mounted as separate parts (where prototypical) in mass production. Whenever the fireman shovels coal (acoustically, of course), the fire box shows a soft glow.

The class 94.5-17 is one of the longest lasting and most successful Prussian locomotive designs. Actually its development goes back as far as 1906, when the Royal Railway Directorate (KED - Königliche Eisenbahn-Direktion) in Erfurt had submitted its application to the Prussian Central Authority for the development of a D coupled (five driving axles) steam locomotive for the steep gradients on the lines in Thuringia. The design of the T16 was greatly influenced by the well known locomotive design engineer Robert Garbe and its production commenced in 1905. In total 343 units have been built. With the reinforced T16 (later know as the T16.1) true universal locomotives have been made between 1913 and 1924, which were at home all over Prussia , in Alsatia and Lorraine and as from 1920 in all other parts of Germany. During the long period of construction several changes were made to the design. As from 1921 the T16.1 had a feed dome, which required the relocation of the recuperator from the top of the boiler to the side next to the forward sand box. With the installation of the coupler for the steam heating systems beginning in 1924 the T16.1 (later classified as the class 94.5) were also employed for passenger services. This engine became even more versatile due to raising the permitted maximum speed to 60 km/h after many parts had been standardised as from 1927. Due to its axle load of 17 tons the class 94 was also suitable for branch lines with a somewhat weaker roadbed. Furthermore, due to the installation of the counter-pressure brake by Riggenbach, it replaced the more modern but heavier class T20 on the steep gradient lines in Thuringia. The prototypes of the ESU models class 094 652 and 94 1292 became legendary. During the 1970-ies they both were amongst the last class 94 locomotives in services at the DB and the DR. Until 2005 class 94 1292 proved its power as DB museum locomotive at the Rennsteig line or occasionally also on steep gradient lines in the Eifel region.