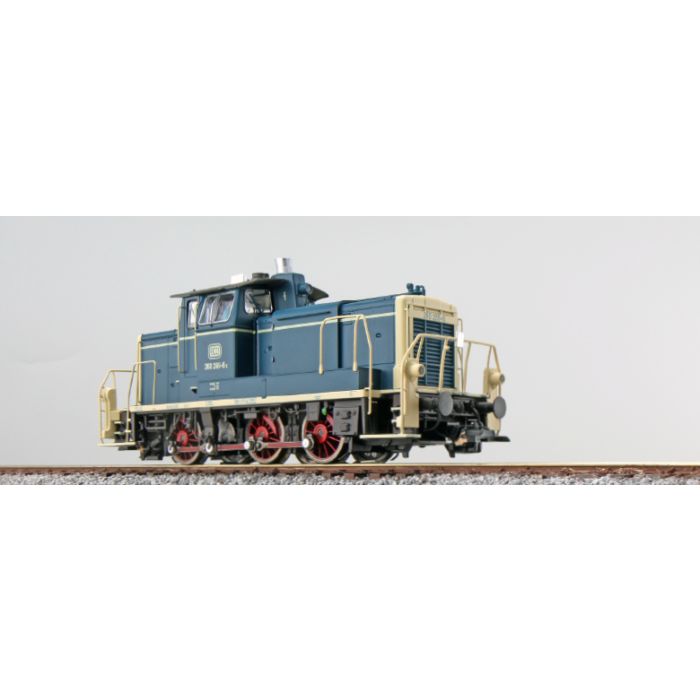 Starting in 1956 the DB (Deutsche Bundesbahn) commenced the procurement of the three-axle shunting locomotive class V60 in order to modernize shunting operations. It was decided to employ a drive system with coupling rods and a jack shaft. Its maximum speed of 60 km/h in mainline gear matched the then common speed of long distance freight trains. The coal-fired oven (so called Dofa heater) only served for keeping the engine of a parked V60 at a suitable temperature. As from the 1990-ies the DB replaced these heaters with externally powered electric heaters. The DB actually differentiated the serial locomotives between light weight and heavy types. Externally one could not detect any difference. The heavy type with 54 t is constructed with a stronger frame compared to the lighter version with 48 t. With the advent of the computer suitable numbering system in 1968, the DB assigned the lighter version as class 260 and the heavy type as class 261. In 1987 the engine was reclassified as a minor locomotive (Kleinlokomotive - literally: small locomotive or locomotors). Class 260 became class 360 and the 261s became 361s. Its categorisation as a Kleinlok saved staff costs, because the railway no longer had to employ "engine drivers", but only "Kleinlok operators", i.e.: specially trained shunting personnel. The locomotives equipped with automatic coupler (AK) and radio control were reclassified as class 364 (light weight version) and class 365 (heavy type). Class 362 and 363 were only designated in 1992 and denominate locomotives equipped with the Caterpillar engine 3412 DI-TA, which was installed instead of the original Maybach GTO 6 / GTO 6A.

The ESU model of the DB class V60 is completely new! Chassis, body, motor, gearbox, centre pick-up including its holding fixture, smoke generator, lighting, digital coupler, speaker as well as all details have been developed from scratch. The headlight inserts have vertical engravings in order to match the appearance of DB standard lanterns. The conversion from AC (as delivered) to DC mode is accomplished by pulling off the centre pick-up and by activating a small sliding switch right in front of the forward axle. The digitally remote controlled electromagnetic coupler (shunting coupler) is inserted into the standard coupler shaft as per NEM 362. The mounting height of the coupler can be adjusted in two steps. If necessary it can be removed and replaced by another (non-digital) coupler without soldering. The newly designed smoke generator supplies a larger amount of exhaust fumes. Of course, the LokSound 5 decoder is completely new. Smooth running characteristics and a number of useful functions and potential settings offer plenty of options for the operation oriented model train enthusiast. There is a function “heavy train” where acceleration and deceleration time are doubled and the motor acoustically works with higher revs. When activating the “locomotive brake”, the locomotive changes to idle and slows down a bit faster than normal – if required, right down to a standstill. This function works independently from the throttle setting. In shunting mode, the locomotive accelerates and slows down faster than in normal mode.