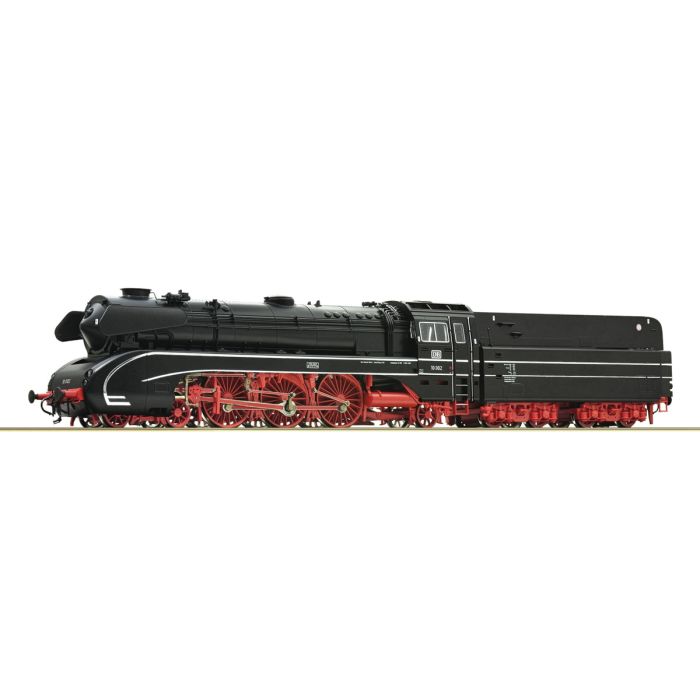 Steam locomotive 10 002 of the Deutsche Bundesbahn.

Class 10 - The Black Swan of the Bundesbahn.
Although the Deutsche Bundesbahn (DB) considered steam traction outdated, it commissioned the company Krupp in Essen to develop a new Pacific express train locomotive in 1953. In 1957 two elegant, 26,503 mm long, partially guarded locomotives with the serial number 10 of the type 2'C1' h3 with a driving wheel diameter of 2,000 mm were delivered. However, they were distinctly different in the way they were fired. While the 10 001 was initially equipped with only an additional oil firing (it was retrofitted later), the 10 002 had a main oil firing from the beginning. The two locomotives were beautified with silver decorative lines and conical smoke chamber doors and reached a top speed of 140 km/h at an induction power of 1,839 kW. However, the two locomotives were only admitted on specific main routes because of the high axle load. Until 1962 they were stationed in the depot Bebra and later in the depot Kassel from where they operated the North-South routes in heavy express train service and on the Main-Weser railway lines. The general infrastructure change and the progressing electrification of the major railway routes were the main reasons why class 10 was never put into serial production. In January 1967, the 10 002 suffered a break of a sliding rod and was decommissioned. It was scrapped in 1972 at the depot Offenburg. In June of the following year, 10 001 also had to quit active service at the Deutsche Bundesbahn (DB). However, the 109 t heavy locomotive was preserved for future generations and can be seen today at the German Steam Locomotive Museum in Neuenmarkt-Wirsberg.