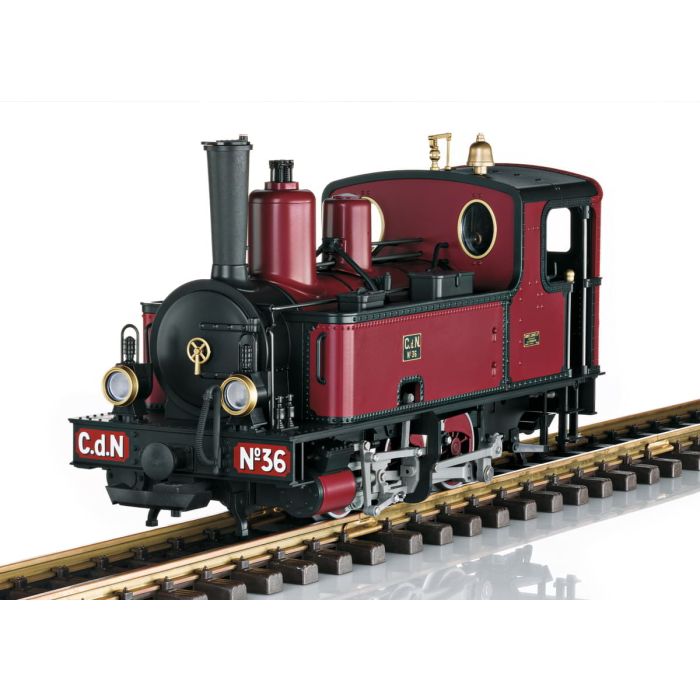 Now Comes Lulu
The CdN steam locomotive, road number 36, was in use until 1956. Then it was set up as a monument in the parking lot of the station at Saint-Brieuc (Côtes-d´Armor). In 1971, a 24-year old young man noticed it, when he took the train to Brittany. After setbacks, disappointments, and various administrative hurdles, the members of the MTVS were finally able to acquire the locomotive. Its nickname was "Lulu" thanks to a dove, which had nested in it during intermediate storage of the locomotive in Seine-et-Marne at the AJECTA. In 1990, road number 36 was placed under monument protection and finally pulled the first museum trains at the MTVS starting in 1997 after 6,000 hours of labor for a complete restoration. In the meantime it has run as "Train à vapeur du Beauvaisis" on the new MTVS museum line between Crevecœur-le-Grand and Rotangy.

This is a model of the steam locomotive, road no. 36, for the French museum railroad Museé des Tramways à Vapeur. The locomotive has a prototypical paint and lettering scheme for Era VI, thus as the locomotive appears at present in use. All of the wheel sets are driven by a powerful Bühler motor with ball bearings and the locomotive has traction tires. The locomotive has an mfx/DCC sound decoder with many light and sound functions. Length over the buffers 31 cm / 12-3/16".