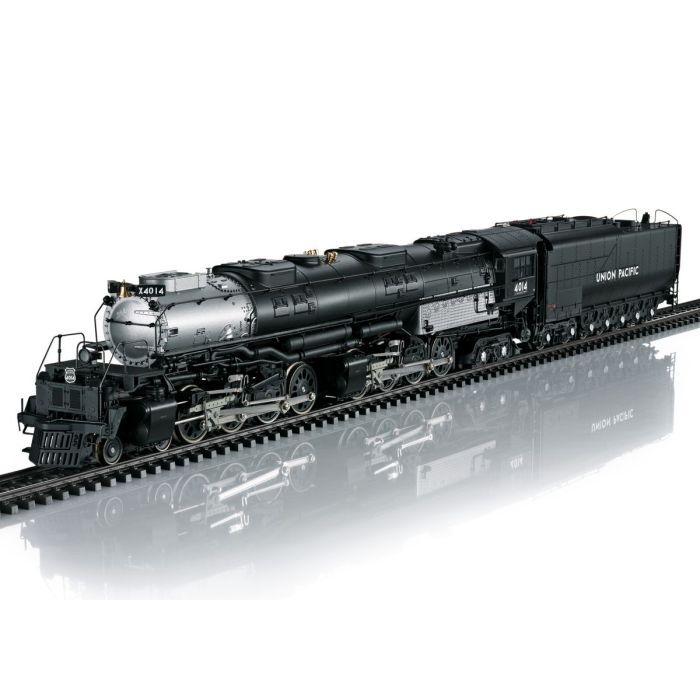 The locomotive has a digital decoder and extensive sound functions. It also has controlled high-efficiency propulsion. 8 axles powered. Traction tires. The locomotive has an articulated frame enabling it to negotiate sharp curves. It also has Boxpok driving wheels. 2 each 7226 smoke generators can be installed in the locomotive. The headlight changes over with the direction of travel. The headlight, the backup light on the tender, the number board lights, and the smoke unit contacts will work in conventional operation and can be controlled digitally. The engineer's cab lighting can be controlled digitally. Maintenance-free, warm white LEDs are used for the lighting. The running gear is articulated for operation on curves. The locomotive has Boxpok driving wheels. The locomotive comes from the factory with RP 25 wheels and Kadee-compatible couplers. The middle driving axles are spring-loaded. Steam lines are mounted to swing out and back with the cylinders. There is a close coupling between the locomotive and tender. There is a powerful speaker in the tender and the volume can be adjusted. Coupler hooks can be inserted in the pilot on the front of the locomotive. The locomotive has separately applied metal grab irons. There are many separately applied details. Figures of a locomotive engineer and fireman for the engineer's cab are included.
Length over the couplers approximately 46.5 cm / 18-5/16".

The locomotive comes in a wooden case.