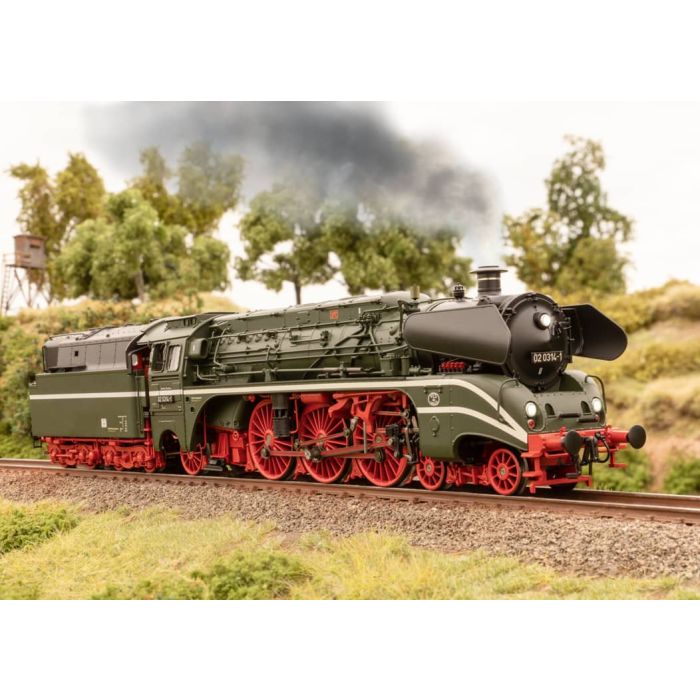 The "Schorsch" – a Unique One-of-a-Kind on the German State Railroad (DR).
The steam locomotive road number 18 314 of the German State Railroad (DR) of East Germany (GDR) later nicknamed "Schorsch" has an unusual, even extraordinary life history. Once placed into service in 1919 as a Baden class "IV h" "High Stepper", the DRG took over it as road number 18 314. After the end of World War II, this locomotive went to the Soviet Zone in trade for a Bavarian class S 3/6, where the subsequent VES-M Halle (Railroad Research and Development Locomotive Management Department in Halle) urgently needed a fast four-cylinder compound steam locomotive for experimental work. In 1960, it was equipped with a "Reko" (rebuilt) boiler, partial streamlining, a new cab and tender, as well as a green paint scheme in order to run faster. Conversion to oil firing in 1967 was the icing on the cake. It was put into storage at the end of 1971 and was sold in 1984 to West Germany. Since 1986, it has been one of the showpieces at the Automotive and Technology Museum in Sinsheim. It is on permanent loan from the HEF (Frankfurt Historic Railroad).

Prototype: German State Railroad (DR/GDR) of East Germany express train steam locomotive, road number 02 0314-1, with oil main firing and an oil tender. Converted version as an experimental locomotive for the VES-M Halle (Saale) (Railroad Research and Development Locomotive Management Department). Version with a "Reko" (rebuilt) boiler and partial streamlining, based on road number 18 314 (former Baden class IV h). Witte smoke deflectors and an inductive magnet on one side included. The locomotive looks as it did around 1970/71.

Model: The locomotive has a digital decoder and extensive sound functions. It also has controlled high-efficiency propulsion with a flywheel in the boiler. 3 axles powered. Traction tires. The locomotive and tender are constructed mostly of metal. There is a factory-installed smoke generator in the locomotive. It has dynamic smoke exhaust that varies with the locomotive speed. The triple headlights change over with the direction of travel, will work in conventional operation, and can be controlled digitally. There are also dual red lamps on the front of the locomotive, which can be controlled digitally. The cab lighting and the running gear lights can be controlled separately in digital operation. Maintenance-free warm white and red LEDs are used for the lighting. There is a close coupling with a guide mechanism between the locomotive and tender. There is a close coupler with an NEM pocket and a guide mechanism on the tender. The minimum radius for operation is 360 mm / 14-3/16". Streamlining without wheel cutouts below the cab is included for installation for large radius curves or display cases. Piston rod protection sleeves and brake hoses are also included.
Length over the buffers 27.2 cm / 10-11/16".