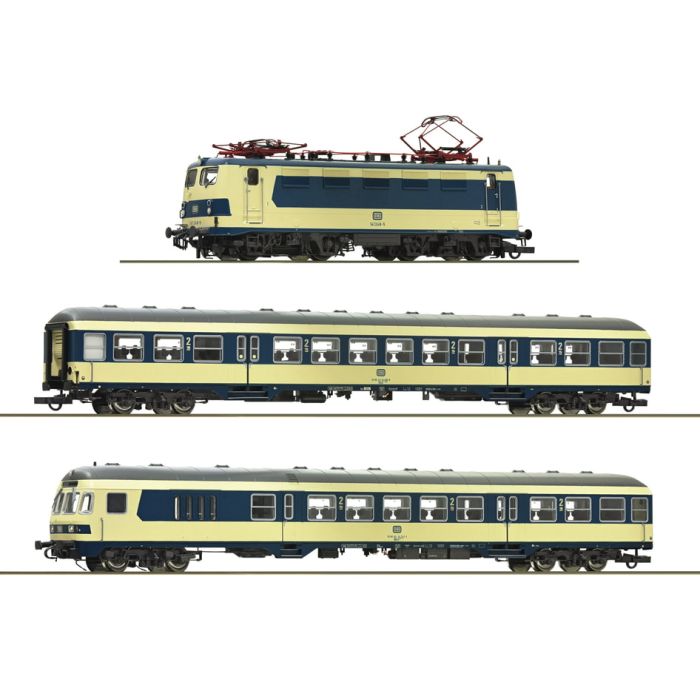 Train set with an electric locomotive class 141 and two commuter coaches of the Deutsche Bundesbahn.

In the mid-1970s, the Ausbesserungswerk Karlsruhe developed three prototype carriages for a push-pull train and urban railway operations in the Ruhr area. Why? There were many complaints from passengers that there was no WC in the ET 420 railcars on the long routes in the area of the Ruhrgebiet. So the Deutsche Bundesbahn relied on the many "Silberlinge" available at the time. The test coaches were given a new, more clearly arranged interior. Instead of the hinged folding doors, the vehicles were fitted with pivot-and-slide doors with electromagnetic door locking. Instead of the luggage compartment, seats were also installed in the driver's cab coach. The coaches were painted in ocean blue/beige colours. Compared to other trains at that time, the window band was ocean blue and the area under the windows beige. The 141 248, from the Hagen-Eckesey depot, was painted asymmetrically to give it an uniform appearance. Two additional standard "Silberlinge" were repainted to be used as replacement coaches. In the end, the train could not impress with its performance in the S-Bahn service, also because of the comparatively moderate acceleration capacity of the locomotive. The coaches were then used in the regular local traffic, which was not possible without restrictions; however, the coaches' accesses were only permitted for elevated platforms.